Social media giant, Facebook’s very own social media accounts were temporarily taken over by a group of hackers on Friday and the hacking group OurMine posted on the Twitter and Instagram accounts for Facebook and Messenger, writing “even Facebook is hackable”. 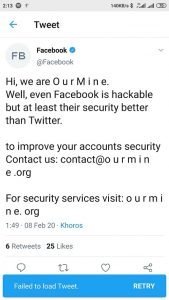 Later, Twitter did confirmed that the hacking occurred and claimed that it happened via a third-party. And in a statement Twitter said “As soon as we were made aware of the issue, we locked the compromised accounts and are working closely with our partners at Facebook to restore them.”

OurMine known for hacking corporations and high-profile individuals in the past and the group has been responsible for hacking the social media account of Twitter’s founder Jack Dorsey, Google’s chief executive Sundar Pichai, and even Facebook co-founder Mark Zuckerberg, whose Pinterest account they had hacked.